Do you know your Risk Number?  Client Login

As a reminder, MACROCASTTM is Corbett Road’s proprietary investment model. MACROCASTTM measures the attractiveness of risk assets by looking at the VITALS of the market—Valuation, Inflation, Technical Analysis, Aggregate Economy, Liquidity, and Sentiment. By looking at multiple factors, we can better gauge market conditions and the probability of a major market decline.

The strongest readings in MACROCASTTM continue to be in the Aggregate Economy category, which focuses on leading indicators of economic activity. Most of the indicators we track in this group remain strong and suggest economic growth will continue.

The Sentiment category was postive as well. Sentiment declined in some areas thanks to the recent market sell off, and stocks tend to perform better when sentiment is weaker.

Technicals are the most mixed category, as the volatility in October caused the market to trade just below its 200 day moving average (200 dma). The market is considered in an uptrend if it trades above the 200 dma and in a downtrend if it is below. Keep in mind that the 200 dma has not been a good sell signal recently. Trend followers have been “whipsawed” the past several years, selling out of the market after a decline, and buying back at higher prices after prices rose back above the trendline.

We view the most recent decline as a healthy pullback hat occurs almost every year, even during bull markets. The following chart from JP Morgan illustrates this: 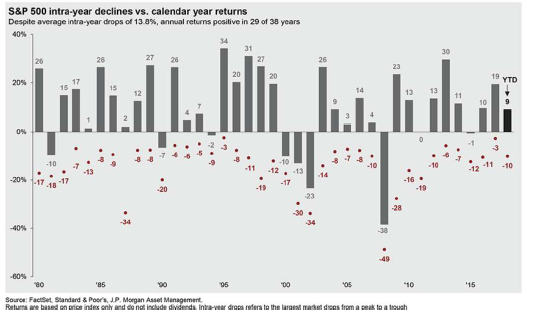 The 10% decline for 2018 occurred from January to February. The peak-to-trough decline in October is around 7%. It is also important to note that it is not uncommon for the market to experience multiple declines of 5% or more during the year (as reflected in the following chart). 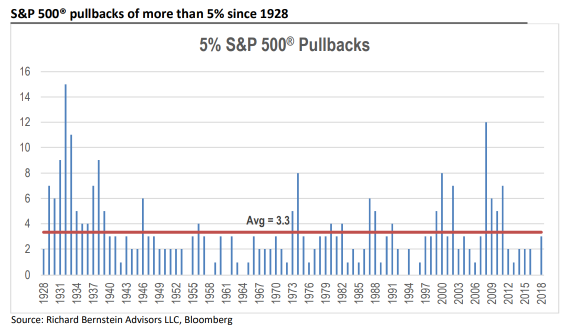 While it is difficult to predict what will happen over the next few weeks, we believe the market will resolve higher in the coming months as a result of strong momentum going into October, with the following two studies as the most encouraging:

The market was up 6 months in a row. Before October, the market generated positive returns for six consecutive months. This has occurred 21 times in the past—most recently in the 6 months ending in September 2017. A year later, the market was higher 85% of the time (data from Schaffer’s Investment Research): 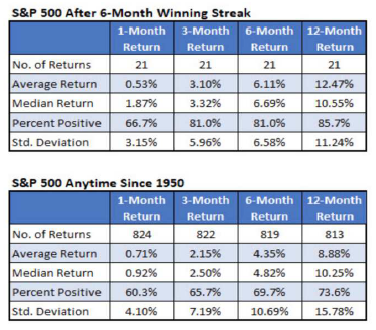 A new multiyear high in the market after going at least 6 months without one. At the end of August, the market hit a new all-time high after going at least 6 months since the previous record. According to Nautilus Research, this has occurred 24 times since 1926. In all 24 instances, the market was higher a year later by an average of 14%. Please see important disclosures at the end of this article

As we mentioned in the previous section, the market has been very volatile since the end of the third quarter. So, while the numbers in the table below have shifted mostly lower, the key takeaways from asset class performance remain the same. 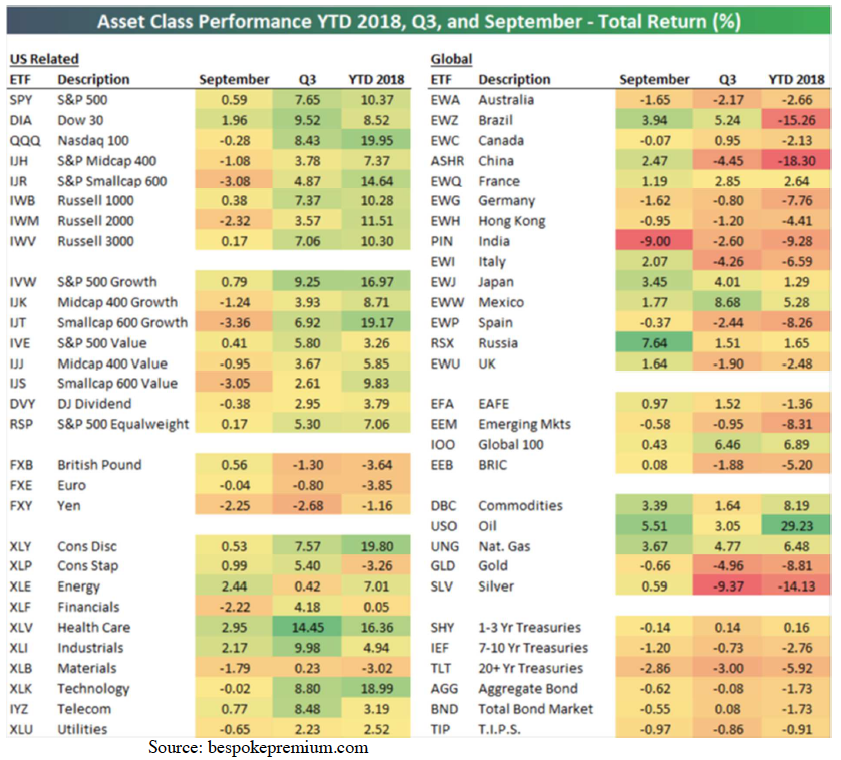 Here are the most interesting findings on Asset Class performance through the first nine months of 2018:

2. Tech & Growth Stocks are the best performing sector and style. Technology stocks are among the best performers year to date. Growth stocks, which are categorized by above average earnings growth, have strongly outperformed value stocks, although the difference has diminished since the end of the 3rd quarter.

3. Bonds still struggling. Another thing that has not changed since the end of Q3 is bond underperformance. The aggregate bond index is set to finish negative for only the third time in 40 years. One thing to note, however, is that despite the decline of 1% this month, equities have sold off much more. This demonstrates the benefit of diversifying with bonds as they tend to exhibit much less volatility in a market decline.

We will publish our next edition of Macro Musings in early December, which will cover our firm’s outlook for 2019. Thank you for reading our latest thoughts and analysis.