Do you know your Risk Number?  Client Login

The Conference Board’s Leading Economic Index (LEI) gained last month, setting another cycle high. The LEI is one of the most reliable indicators available. Since 1980, the LEI has peaked at least 10 months before the onset of a recession (from dshort.com): 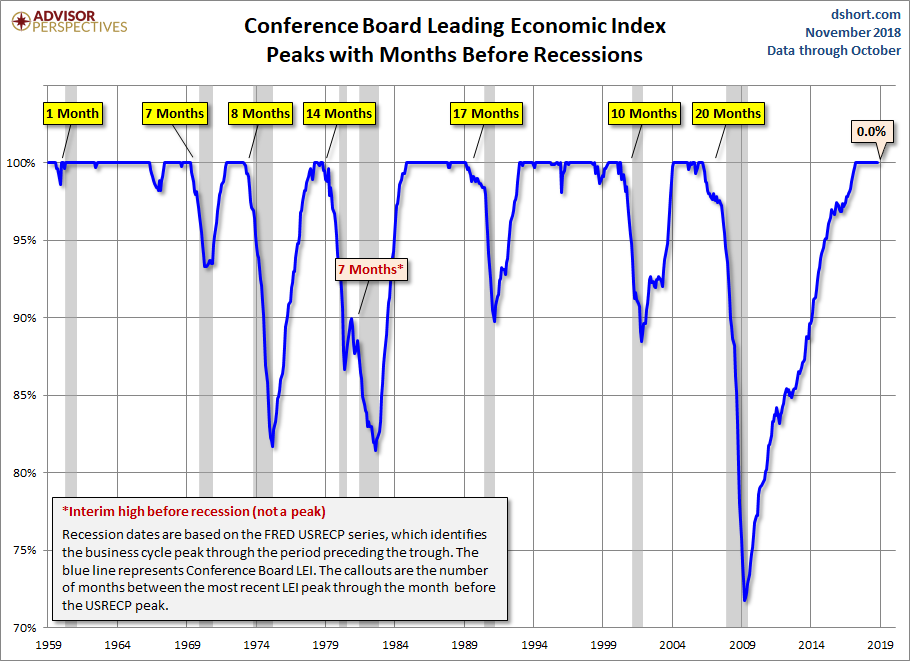 Digging deeper, two key indicators we follow closely are not yet signaling any concern. The first is real retail sales, which hit another all-time high last month. Historically, retail sales peak or flatten well before a downturn: 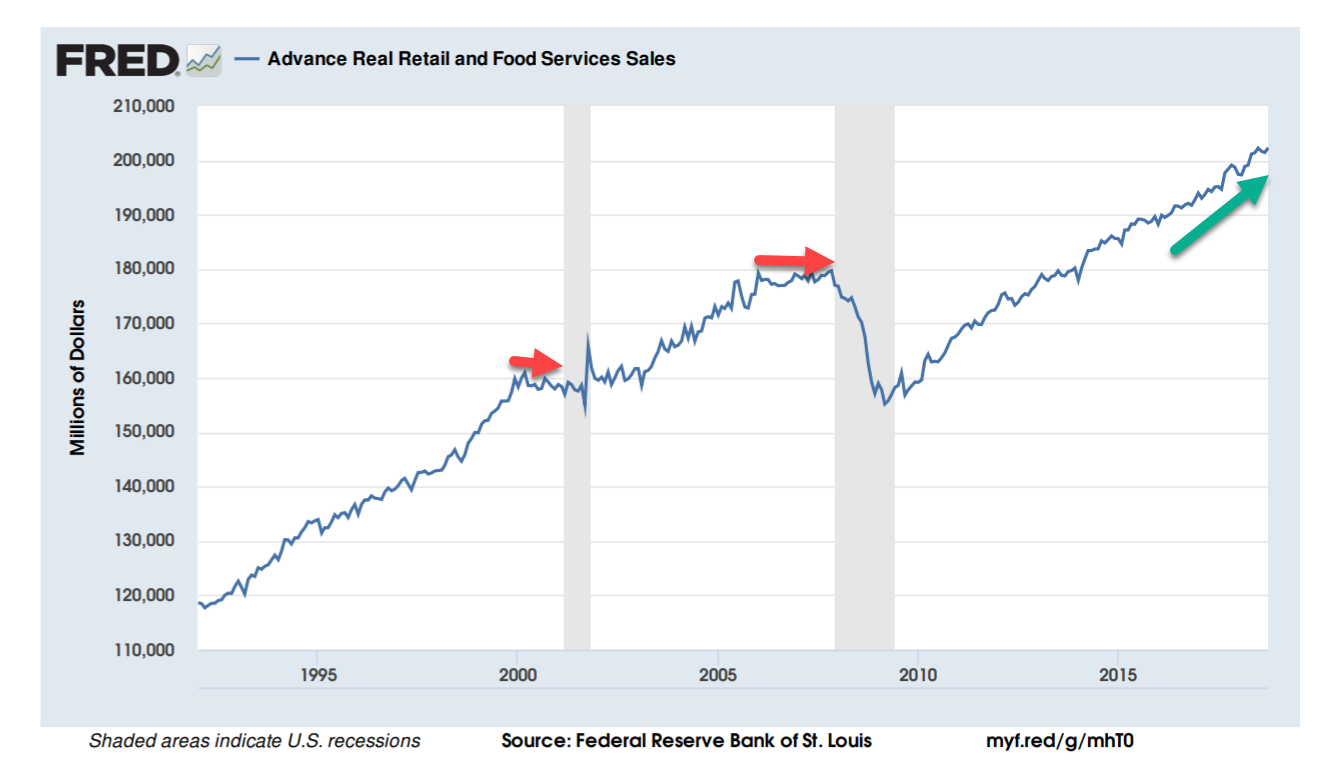 The second indicator is initial claims in unemployment. If there is deterioration in the job market, it often shows up here first, and initial claims often hit a low before a recession start: 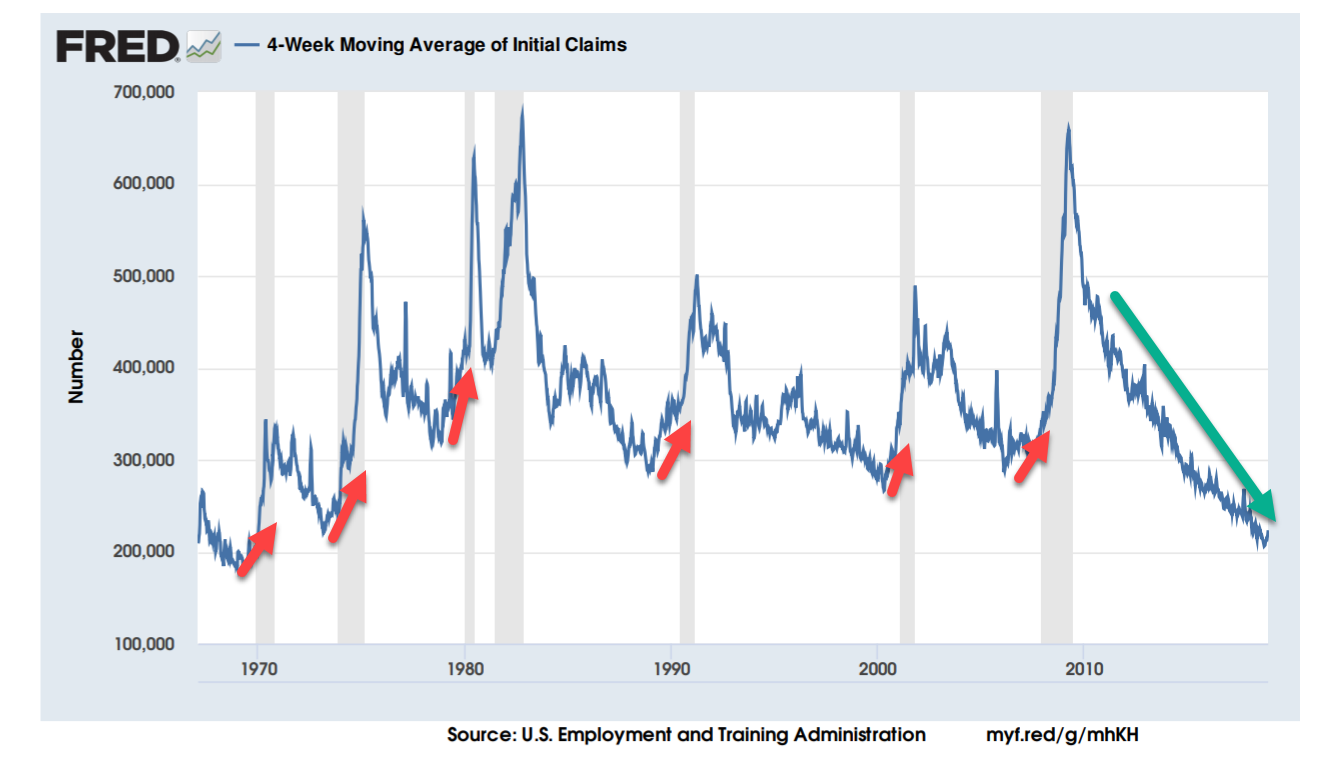 THE MOSAIC OF WORRY: HOUSING, TRADE, and THE FED

The US economy is strong, but not everything is rosy. There are three areas of concern going into 2019, which we have dubbed “The Mosaic of Worry”. The biggest risk are in housing, the trade dispute with China, and the Fed.

First, new home sales, which declined for the seventh consecutive month in October, near a three-year low (data from Calculated Risk): 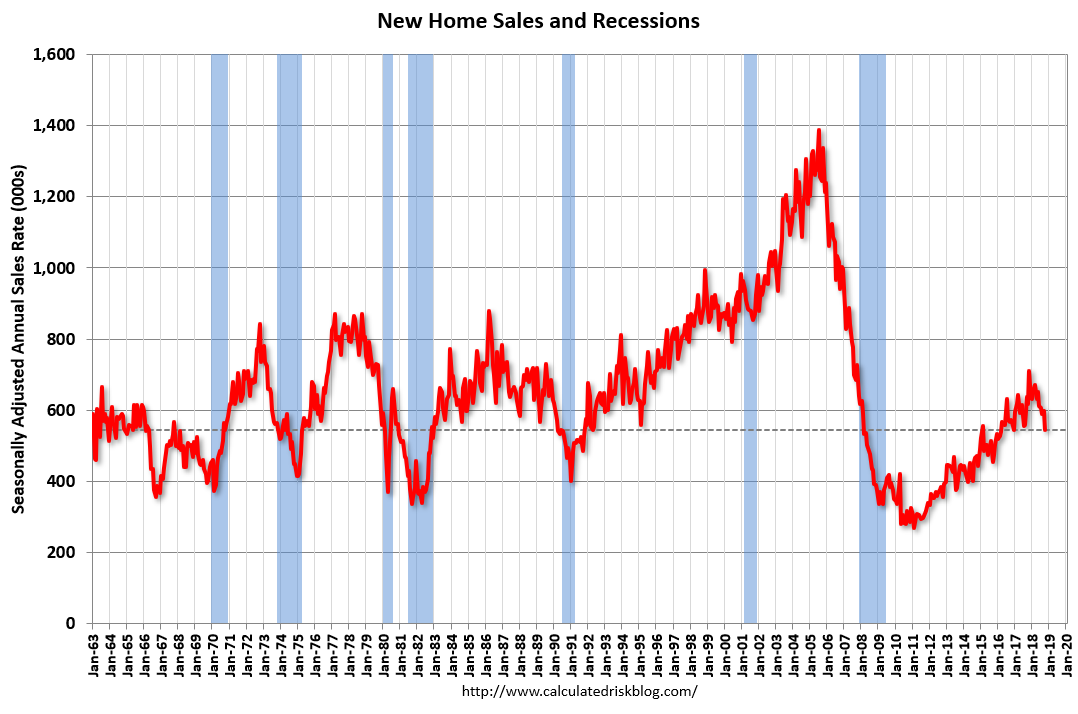 The slowdown has been attributed to higher mortgage rates and last year’s tax cut bill, which caps mortgage and property tax deductions. Housing is an important leading indicator, turning down ahead of a recession at least a year in advance.

But declining home sales can peak years before the business cycle. Home sales peaked in 2005, the economy did not enter recession for two more years. Furthermore, housing is nowhere near as large a part of the economy as it was during the bubble, so a downturn has less negative impact on GDP then in the past.

The next issue is trade. The US agreed to suspend further tariffs for 90 days while representatives try to work out the differences between the countries. If no agreement is made, then tariffs up to 25% on an additional $250 billion in goods will come into play (data from BBC): 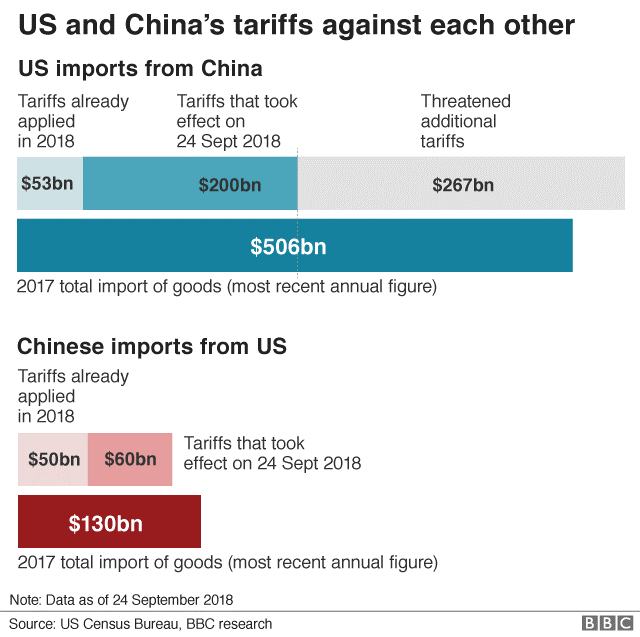 The impact on the US economy, in this case, is unclear. The US consumer would likely bear a burden, but so would corporations, who are the ones who actually pay the tariff. For China, it is likely to hurt their exports, which will affect other economies in the region, such as Malaysia, Singapore, Japan, and South Korea. However, if the Chinese currency, the Renminbi, weakens enough, it could increase sales to other countries. There are too many moving parts to be confident in one outcome over the other.

One thing is clear: the longer this festers, the longer an uncertainty hangs over the market, and that is not a positive development.

The last and arguably largest worry is how quickly the Fed raises rates. Another rate hike in December is almost certain, but the number of rate hikes next year are up in the air. At the beginning of October, Fed Chairmen Jay Powell said interest rates were “a long way” from the neutral rate, with neutral being defined as the interest rate that neither helps or hurts the economy. Last week, Powell suggested rates were “just below” neutral, which sparked a market rally.

We are not sure the slight change in language (“Fed speak”) warranted such enthusiasm from markets. Fed governors have repeatedly suggested they are “data dependent”, meaning they will raise or lower rates in response to the perceived strength or weakness in the economy. Powell’s comments did not change that belief.

Neither his original comment in October, nor the update last week, had much of an impact on the yield curve, which depicts the difference between short-term rates and long-term rates. The past several times the yield curve inverted, when the 2-year rate rose above the 10-year rate, the economy went into recession.

Corporations would pay the tariffs on imported goods, but the US consumer would like bear the bulk of the burden as these companies pass along the cost through increased prices. 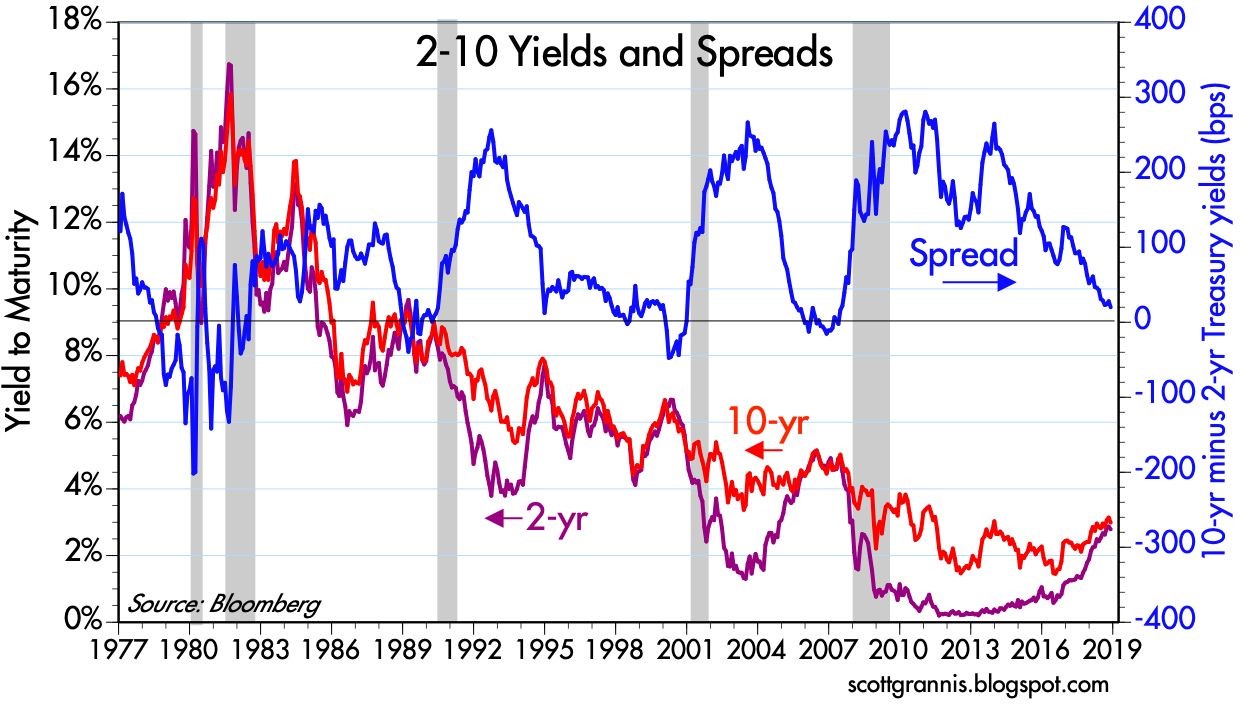 Two to three rate hikes next year should be enough to invert the curve. But when it occurs, it does not spell automatic doom for the expansion. In previous instances, the economy continued to grow an average of 19 months after the curve inverted.

Still, we see the above three risks as being the clearest threats to the economy. Each of them could damper growth individually, and a combination of all three could drag the economy down even more.

THE BASE CASE IS NO RECESSION in 2019

Despite these concerns, we believe the combination of continued, strong job growth, consumer spending, and lower oil prices will provide enough of a footing for the expansion to continue and become the longest on record:

What does this mean for the market next year? While it does not tell you how the market will perform, an economy that is growing increases the chance that the market will be positive. Stocks have generated positive returns in 87% of years when the economy has grown (data from Goldman Sachs): 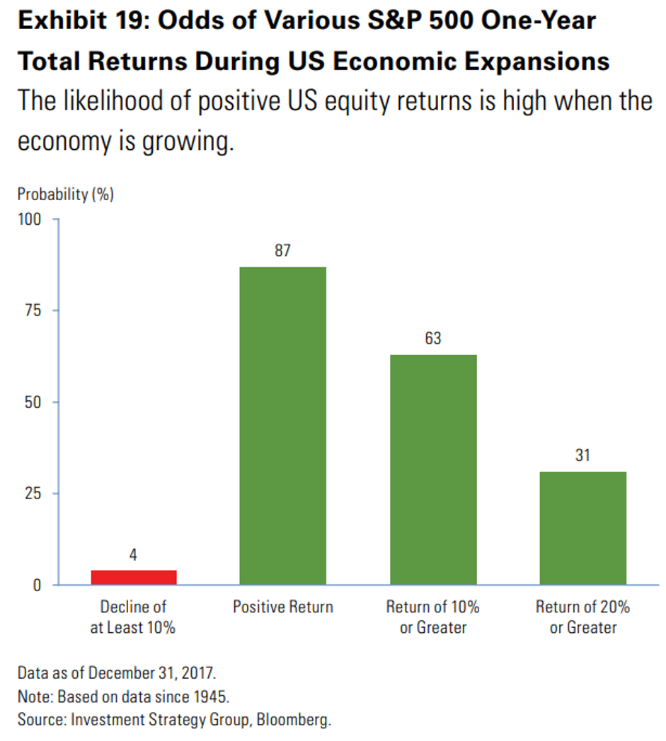 This is the final Macro Musings of the year. We will publish our 2018 Year in Review later next month.

All of us at Corbett Road would like to wish you a happy and joyous holiday season and a successful New Year. Thank you for your continued trust and business.

The chart(s)/graph(s) shown is(are) for informational purposes only and should not be considered as a suggestion of any investment recommendation, investment strategy, or as an offer of advice to buy, sell, or exchange any investment product or investment vehicle. Past performance may not be indicative of future results. While the sources of information, including any forward-looking statements and estimates, included in this (these) chart(s)/graph(s) was deemed reliable, Corbett Road Wealth Management, Spire Wealth Management LLC, Spire Securities LLC and its affiliates do not guarantee its accuracy.

The views and opinions expressed in this article are those of the authors and do not necessarily reflect the opinions of Spire Wealth Management LLC, Spire Securities LLC or its affiliates.

All information is based on sources deemed reliable, but no warranty or guarantee is made as to its accuracy or completeness. MACROCASTTM is a proprietary index used by Corbett Road Wealth Management to help assist in the investment decision-making process. Neither the information provided by MACROCASTTM  nor any opinion expressed herein constitutes a solicitation for the purchase or sale of any securities, and should not be relied on as financial advice. The phrase “the market” refers to the S&P 500 Total Return Index unless otherwise stated. The phrase “risk assets” refers to equities, REITs, high yield bonds, and other high volatility securities. Past performance is no guarantee of future results.